Valerio Adami is a modern art classic. His works are deeply rooted in the humanist tradition of Europe and focus on human existence and cultural identity. Some consider him a modern philosopher who expresses his thoughts through colour and shape. Both his life and art were shaped by long journeys around the world and his acquaintance with various artists and intellectuals.

Comic art and pop art are said to have had an enormous influence on Adami’s work. A series created during his stay in New York in 1968 caused his work to be labelled as “European pop art” for some time. In the 1970s, Adami’s style changed: he started using colours to create an atmosphere while commenting, connoting, and psychologising within his paintings. In 1964 and 1977 he took part in the documenta and from 1970 he received retrospectives of his work in major museums around the globe. In 2005 Adami founded the Fondazione europea del disegno – Fondation Adami in Meina, Italy. 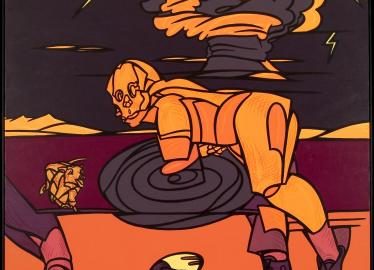 Valerio Adami, born in Bologna in 1935, is today one of the classics of contemporary representational painting in Italy.