Pablo Picasso has gone down in history as the most significant artist of the twentieth century. No other artist has been exhibited so often, studied so extensively, referred to in so many publications, or discussed on such a scale. As the pioneer of cubism, together with Georges Braque, Picasso definitely rejected the formal and aesthetic values of the nineteenth century. He took inspiration from any artistically oriented style or cultural heritage – from African sculptures to iron bicycle handlebars. He was tremendously productive until the end of his life; his art was marked by his irrepressible zest for life and, especially in his later works, by the awareness of his own mortality.

Picasso was born the son of a painter and art teacher, who taught him to paint from a young age. Picasso completed his first oil painting when he was nine, and at the age of ten he started art education at a local school in a small town in Galicia. As an extraordinarily talented teenager, he became a student of an art school in Barcelona, where he joined a circle of avant-garde artists. He then studied briefly in Madrid, had his first successful exhibitions in 1900, and visited the art metropolis of Paris. Picasso lived in Paris, Barcelona, and Madrid. It is at this time that he first developed his own style: the “Blue Period” (1901–1905) was followed by the more optimistic “Rose Period” (1905–1907). He lived in basic conditions in a house run by artists in Paris’s Montmartre district. Inspired by Cézanne and influenced by the tribal art of Africa and the Pacific Islands, Picasso painted Les Demoiselles d’Avignon (The Young Ladies of Avignon) (1907) – the masterpiece that gave birth to cubism. Initially, Picasso and Braque deconstructed objects into basic geometric shapes only to reconstruct them again around 1912 (analytical and synthetic cubism).

Towards the end of the First World War, Picasso returned to figurative painting based on classically styled, simplified monumental forms. His expressive, naturalistic works dissolved into cubist paintings, and the styles became blurred. In the 1930s, Picasso made several sculptures, including assemblages and wire constructions. In his numerous graphic works exploring the motif of the minotaur (as a Spaniard, Picasso was fascinated by bullfighting), he examined the connection between sexuality, violence, and death. Countless portraits of women explored the relation between sexuality and artistic creativity. His famous anti-war painting Guernica (1937) reflects how much he was affected by the Spanish Civil War. From 1946, Picasso lived on the Côte d’Azur. He spent time studying the Old Masters, such as Delacroix, Velázquez, and Manet, and worked obsessively and extensively on his late – and quite controversial – pieces. The “wild” images sketched on canvas are juxtaposed with reflective, refined academic drawings and copperplate etchings in which Picasso referred both thematically and stylistically to the entire history of art. 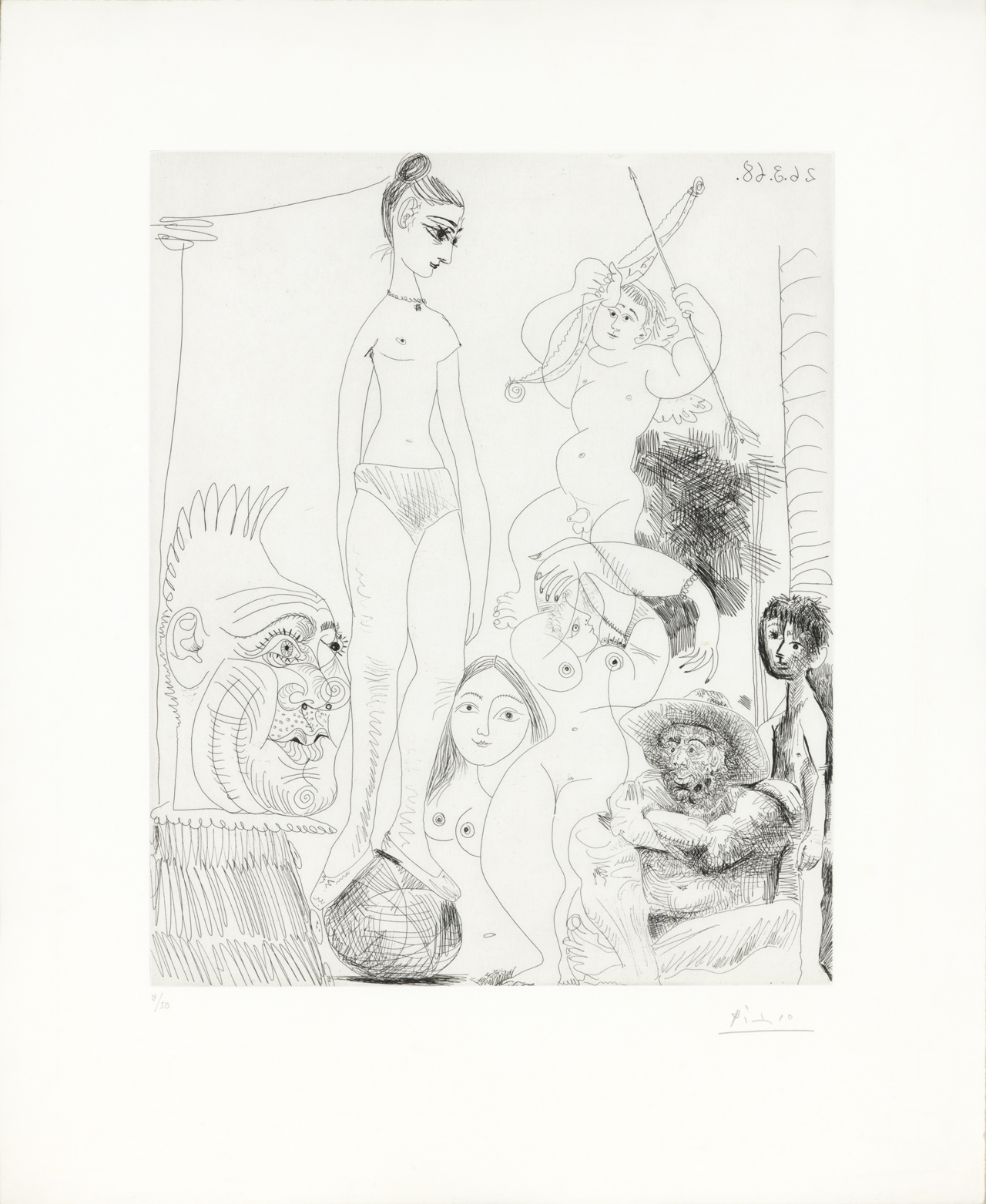