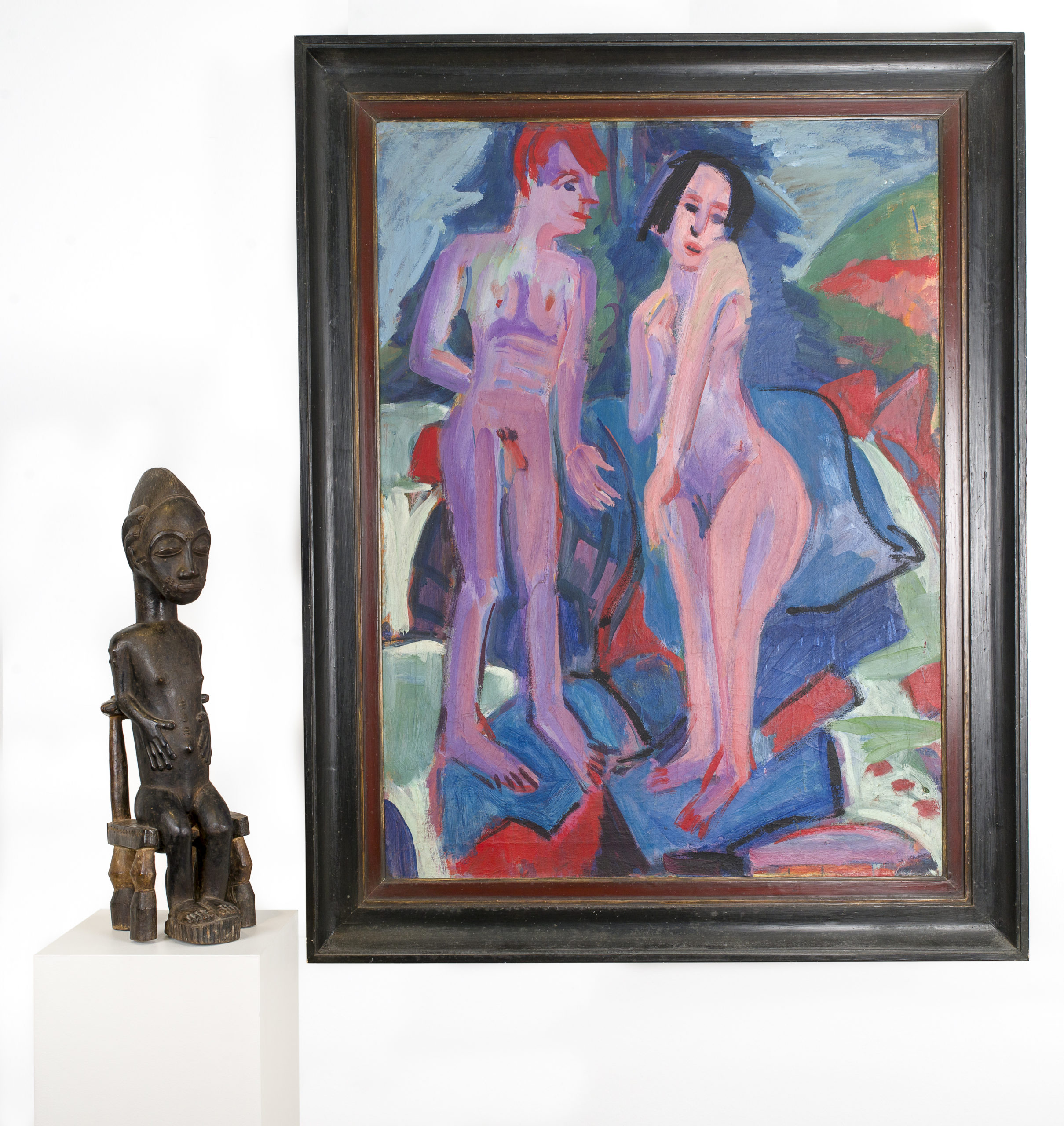 In the context of selected works from Africa

Anyone who has seen and experienced the performance of “Faust” by Anne Imhof in the German Pavilion at the 57th Biennale in Venice in 2017 witnessed an “absolute present”, whose essence is communicated to the viewer directly, indeed, at that very moment. Only on rare occasions is art so intense and existential.

100+ years ago, it was the artist Ernst Ludwig Kirchner who, in and with his drawings, prints, paintings and sculptures, made this feeling of the absolute present visible. Not only in the so-called fifteen-minute nudes, which Kirchner jotted down rather stencil-like on his drawing paper, we are witness to a spontaneous, graphic concentration and expression of energy. Kirchner’s dynamic, even nervous brush or pencil stroke, which became his personal creative trademark through all phases of his work, stands for his existential interpretation of the expressive. As observers, we find ourselves looking at works of art that are partly intoxicated, partly unreserved, however, always full of suspense. And these works may be called suggestive.

It is not only – but also – that longing for originality and that suggestive power which let Ernst Ludwig Kirchner seek and find stylistic confirmation in non-European role models. In addition to stylistic kinships that existed beyond a ritual context, again and again it was the otherness of the shapes in African figures especially that fascinated Kirchner and which he understood as a liberation from the neo-classical ideals of beauty at that time. Exemplary of such correspondences, in our exhibition, African wood sculptures and a metal relic figure from the 19th or early 20th century flank Kirchner’s works in a sensual juxtaposition. The magical nature of these sculptures and numerous formal analogies show Kirchner’s works in an exciting context. And it is, last but not least, this absolute present that directly communicates itself to the observer of this tribal art, and which presumably also fascinated Kirchner about African art. The exhibition features an oil painting and works on paper by Ernst Ludwig Kirchner together with six African sculptures.

“Ernst Ludwig Kirchner was a hypersensitive artist. Without his vulnerability as well as emotional and intellectual openness to the unusual, the otherness, he could not have created such an impressive body of work. It testifies to the greatest intensity and absolute present. At the same time, these qualities accompany his lifelong dilemma of craving continuous acknowledgement and recognition. If he did not receive them, he openly sought distraction from his subjectively perceived failures.”